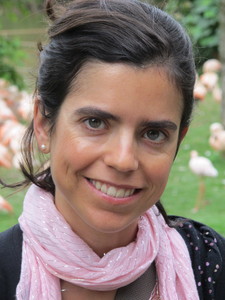 Some people would dispute that academic life is a boring and routine. However, in many cases it is not true. NLPPeople is delighted to present an interview with one of the brightest minds in the field of machine translation Dr. Marta R. Costa-jussà. She tells us about her exciting life full of travels and cutting-edge projects she has been involved in.

I entered the world of machine translation by the end of 2004 when I started my PhD at the Universitat Politècnica de Catalunya (UPC, Barcelona). My research group specialized in Speech Recognition, but the members of the group had been working in machine translation for two years when I joined them. At that time, I had just finished my degree in Telecommunication Engineering and my only experience in research had been a six-month internship at LIMSI-CNRS (Paris) where I worked in language modeling for Speech Recognition under the supervision of Dr Jean-Luc Gauvain. I was offered to stay at LIMSI-CNRS and working in the TC-STAR project, but for personal reasons (I was getting married that year), I decided to go back to Barcelona. However, it was my internship at LIMSI-CNRS which encouraged me to start my research career. Once in the UPC, I had the choice of doing my PhD either in speech synthesis or in machine translation. Given my recent experience with language modeling, I was recommended to follow the second option. Looking back, I am quite happy with my choice, since I joined a pretty young group, which was very well-supervised by Prof Mariño and Prof José A. R. Fonollosa and I had the opportunity of studying a quite new research area: statistical machine translation. There was a lot of work to be done at that moment in that area, and there were not many consolidated groups working on it.

After my PhD, I have worked for almost four years at Barcelona Media Innovation Center under the supervision of Dr Rafael E. Banchs and with the support of the Juan de la Cierva Research Fellowship Program. During those years I have visited Institute for Infocomm Research (Singapore) for a 1-month stay and the Universidade de Sao Paulo (Brazil) for a 8-month stay. I have participated in 12 European and Spanish national projects. I have organized workshops in the areas of machine translation and information retrieval (ML4HMT 2011/2012, ESIRMT and HyTRA 2012/2013, CREDISLAS 2012) and I regularly serve in committees of international conferences. My research publications include more than 15 international scientific journals and 40+ international conferences. I have been scientific consultant for two translation companies (TaWithYou and UniversalDoctor) during several years. Recently, I have just joined the Institute for Infocomm Research under the supervision of Dr Haizhou Li and with the support of an International Outgoing Fellowship Marie Curie.

I am starting an International Outgoing Fellowship Marie Curie Action which is a two-year project funded by the Seventh Program of the European Commission. I will spend the first year at the Institute for Infocomm Research (I2R, Singapore) and the second one at the UPC . The project I am starting to work on is entitled IMTraP (Integration of Machine Translation Paradigms). As I am just starting it, it is difficult to think about my mid-term future plans. As long term future plans I do not refuse being a full professor at the University where I studied: the UPC or to work in any country of the world, as long as my career is not in conflict with my family plans.

Well, I have to admit that I either I was quite lucky or my hard work during my PhD thesis was rewarded, but finding a job in academia after graduation was quite easy for me. In 2008, I applied for a ‘Juan de la Cierva’ program before finishing my PhD and I just got it. So I graduated, and after that I started this three-year project, which I had defined in the area of cross-language information retrieval to be implemented at the Barcelona Media Innovation Center.

My main alternatives to this option where going abroad in Europe, Asia or America or working on a research project at some research center or University in Barcelona. I had quite a few offers to work abroad in the Netherlands, California, Singapore and Paris, among others. Although following any of these offers could have been quite enriching for me and my research career, I decided to stay in Barcelona (I was happily expecting my first son). However, I took advantage of the freedom of being attached to my own project and during the ‘Juan de la Cierva’ three-year program, I did several fruitful international research visits. In fact, I stayed one month at I2R and eight months at the Universidade de Sao Paulo (USP).

I would say that any job seeker in academia should be aware of the fellowships in their countries and in the country they are looking for a job. Also, they should be aware of big research projects that are being developed at that moment which could have funding for researchers. And last, but not least, job seekers should have networking actions very active. By the way, do not forget to be subscribed to NLPPeople.com!

When preparing for a job, try to be informed of what are the most important merits in the country or institution where you are looking for the job. For example, in case of Spain (and it may be extended to the rest of Europe), most important criteria according to which employers make their choice is to have publications in JCR-indexed journals.

When choosing a job, try to incorporate into a hard-working and active group where your supervisor is accessible. Obviously, try to work within well-known institutions and well-positioned supervisors.

Technically, in the area of MT, I think that hybrid machine translation systems have a long way to go, since they can take advantage of different paradigms that have been studied. The introduction of morphology, syntax and semantics in the SMT systems is a key aspect that it is being developed and I guess it will be further developed in the next years.

But… also I do not deny (and it would be great!) a breakthrough in machine translation that could lead to a novel paradigm in the near future.